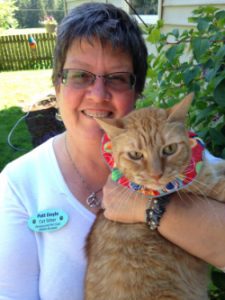 I must have been training to become a cat sitter all of my life, I just didn’t realize it.

My naturalist, law enforcement and maintenance experience in the National Park Service combine with my pet sitting experience make me uniquely qualified to be a Purr-fessional Cat Sitter in Battle Ground, Washington.

I began Pampurred Pet Care as Forks Washington’s only Professional Pet Sitter in 1998.

I cared for cats, dogs, occasionally horses and even a walking stick.

In 2012 we packed our bags and moved to Ilwaco, WA for my husband’s job. I worked as National Park Ranger at Fort Clatsop and interned for Arnicadia Farms Dog Training. Then we transferred to Battle Ground. I figured it was time to get a “real” job. I got that job, then learned that I like working for myself better.

I have been house sitting for my clients in Forks and had added clients from Hillsboro, Oregon and Ilwaco. I finally realized re-opening Pampurred Pet Care was what I needed to do, except a little differently I want to specialize in caring for cats and their companion pets.

I am really enjoying being a member of Chicks Connect. We are women networking together for all of us. I am meeting women and getting support for me personally and for my business. I also can support other women as well. One of the best parts of Chicks are the growing friendships and laughter. I’m a Spotlight Chick Woohoo!